Independent, outspoken, on your side

Today I am pleased to announce that I will be running in the upcoming Saanich by election. I am motivated to run by three things:

1) More Housing: the current vacancy rate of 0.5 percent has translated into skyrocketing housing costs for both home buyers and renters alike. The only solution is to build more inventory. Saanich as the largest municipality within the CRD has to be part of that solution.

“Currently far too many housing preojects are being denied, delayed or downsized by council. We need to ensure that housing which caters to not just high income earners but also those who are middle class and low income is also being built.” 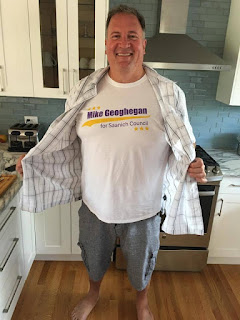 2) Lower Taxes: as a long time Saanich resident I am fed up with seeing my municipal tax bill increasing year after year.

“As the graph below shows Saanich increased taxes 58% from 2006 to 2016. It is high time that Saanich learned to live within the means of its taxpayers many of whom have not seen their income increase at all in those same ten years.”

3) Greater Accountability:  It is a difficult subject but it is long overdue that some sunlight was brought to the dealings that have been going on at Saanich Municipal Hall and within the CRD.

Whether it is millions of taxpayers’ dollars being wasted onmissteps concerning the CRD Sewage Project or the criminal act of placing spyware on the then newly elected Saanich Mayor’s computer, there clearly needs to be greater accountability and transparency  with regards to the decisions being made at both the CRD and Saanich. 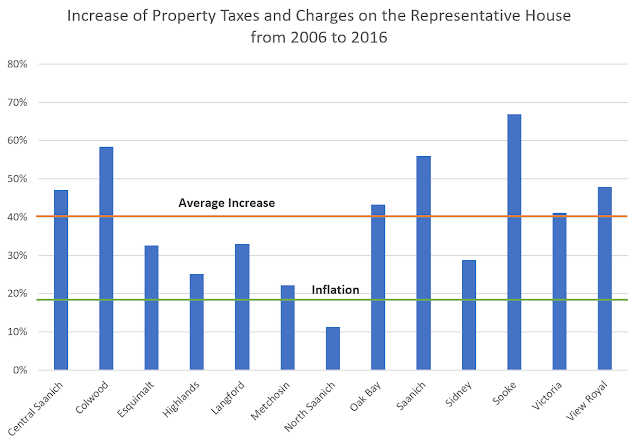 “As a Saanich Councilor I will ensure that never again are staff directed to place spyware on an elected officials computer and I will also ensure that never again are Saanich police resources used to harass a candidate for office as apparently happened in the last general election. I look forward to cleaning up
Saanich and having a community that we can all be proud of.”

As someone who served for seven years on Langford’s Planning and Zoning Committee, I have seen first hand how increased higher density residential, commercial and industrial development can lead to lower taxes while at the same time being able to greatly enhance community amenities and infrastructure.

It has also been recently brought to my attention that Saanich is one of the few municipalities that marks up the cost of water that is provided by the CRD. This form of hidden taxation is a regressive tax that I will seek to repeal.

Saanich needs to be a community where people can live work and play with higher density housing complemented by preserved green space, enhanced bike and hiking trails and the like.

“I am a huge fan of the Lochside and Galloping Goose Trails. My family and I frequently use them and I support opportunities to create and upgrade more biking corridors that are separate from regular street traffic.”

Greater Victoria has a population less than that of Burnaby yet we are divided into 13 different municpal governments. Clearly some form of amalgamation would be benificial and I would support holding a referendum to give all residents within the CRD a say in this matter.

The EDPA has been a costly exercise in bureaucratic redundancy. We have both federal and provincial environmental regulations and a municipal tree by law. We also have the usual Saanich shenannigans around the manner in which the EDPA was implemented.

For example we have the farcical situation where sidewalks and paved driveways have been designated as Environmentally Protected Designated
Areas. As a Saanich Councilor I will vote for the rescinding of the EDPA.

Given my positive relationship with a number of CRD area mayors and councilors I am confident that I can also bring to Saanich and the CRD a greater level of cooperation and coordination that will benefit all area residents. My excellent connections to both provincial and federal politicians means that I will
also be able to bring more in the way of matching infrastructure dollars to Saanich.

As the former CEO of Accumulated Ocean Energy Canada, a start up wave energy company, I have had the pleasure of meeting with a wide range of people from our region’s burgeoning high tech community. These clean green high paying jobs are ones I wish to ensure we continue to attract.

But along with those high paying jobs are the many other jobs we rely on. That is why we need to ensure that the people who build our homes, the folks who serve our coffee and the young couple looking to start a family can purchase or rent affordable housing.

That means not only building more housing but also making sure that what is being constructed meets the needs of all our citizens and not just the wealthy few. Social housing co-op housing and the like are all things we can increase via a collaborative approach with both private developers and other levels of
government.

For further information please visit my campaign website at: www.mikeforsaanichcouncil.ca